The Grand River, which the Chippewa Indians called Owashtanongzibi — meaning further country — has remained home to many Native American tribal communities across the region since the end of the Ice Age. This includes the People of the Three Fires, an alliance of the Ottawa (Odawa), Chippewa (Ojibwa) and Potawatomi (Bodewadi) tribes.
For these tribes, the Grand River provided a primary travel and trade route, and the valley was used extensively for hunting and growing food. The native communities who have lived here have a deep relationship with the river and the land around it.
Around the year 1700, the People of the Three Fires established villages in what is now Grand Rapids, with their main gathering place in present-day downtown. The People of the Three Fires called themselves the Anishinabek or The Original People.
The lives of these indigenous people changed in 1821 when the Treaty of Chicago gave the United States control of the land south of the Grand River.
The area was opened up to settlement and Native Americans increasingly were displaced, often forcibly relocated to make room for new arrivals. The new European fur traders established trading posts with the Ottawa tribes and primarily traded European metals for textiles and fur pelts.
The Anishinabek people continue to live in this region of their ancestors, and the river continues to hold cultural and historical significance for them. At Ah-Nab-Awen Park, there are three large hills designed to symbolize the mounds used in Hopewell Indian culture.

By the late 19th century, Grand Rapids was becoming a major center for lumber production, thanks to the vast pine and oak forests across the region and all along the Grand River. The logging industry supported the production of the high-end furniture that Grand Rapids would later be known for.

Logs could travel on the river from as far away as Lansing to the wood mills along its meandering route. The river was a major factor in the region’s furniture boom, with industry supplanting activities such as transportation and trade. In the summer of 1883, a flood sent millions of feet of logs, like an uncontrollable stampede, into bridges and other barriers; the resulting logjam stretched over 47 miles.

To get a sense of the local wealth that the logging industry produced, walk through Heritage Hill and see the homes of many of our city’s lumber barons. Today, Grand Rapids is known less for its residential furniture, but local companies Steelcase, Herman Miller and Haworth are world leaders in the office furniture sector.

The growth of the logging industry changed how people interacted with the Grand River. The installation of the river’s first dams in 1847 marked a turning point: previously the front yard of the community, the river soon became the backyard for industry.

By 1880, the Grand River, now used for moving logs and large boats and producing power, had become contaminated by logging waste, mixed oil and gas, and human and industrial waste.

For nearly the next 100 years, the Grand River was used as a sewer for the city and its industries. In 1972, however, the federal Clean Water Act helped introduce limits on pollution and began to improve the conditions of the river with the help of the community.

You can still see reminders of the river’s former status as an eyesore: the façades of many older buildings facing the Grand River don’t have windows. Some tenants of the day viewed the Grand River as a nuisance and didn’t want to look at it; some even deposited their waste in the river.

Today the Grand River is enjoying a rebirth. Some say the river is as healthy as it has been in over 100 years, and people value the beauty that it brings to the community. With the installation of the riverwalks, new buildings facing the river, and parks integrated with the river, residents and visitors alike are now using the river not as a sewer but as a playground.

While there are still issues with pollution, the region has embraced solutions to keep the Grand River clean by working with organizations like the Lower Grand River Organization of Watersheds, Plaster Creek Stewards and many others. The City of Grand Rapids has spent $210 million on sewer upgrades over the past two decades, reducing sewage overflows into the river by 99%, and various organizations are working to stop stormwater from flowing directly into the river. This protection was unheard of years ago, but now it is once again a guiding principle for the community.

Just like the Grand River never stops flowing, the region won’t stop planning for the future of the river.

The Grand Rapids Whitewater vision, Green Grand Rapids plan in 2011, 2015 GR Forward Plan, 2017 Parks and Recreation Strategic Plan, and many others have expressed a common desire to create a River for All.

Over and over again, we see that people are interested in how we can reactivate the river. It’s one thing to look at the river from the water’s edge, and quite another to experience the river through kayaking, recreation, and exploration from accessible banks.

Our river’s story is still being told. As Grand Rapids and the surrounding region plan for the future, we can already see some of the plans in action.

The Future of Our River 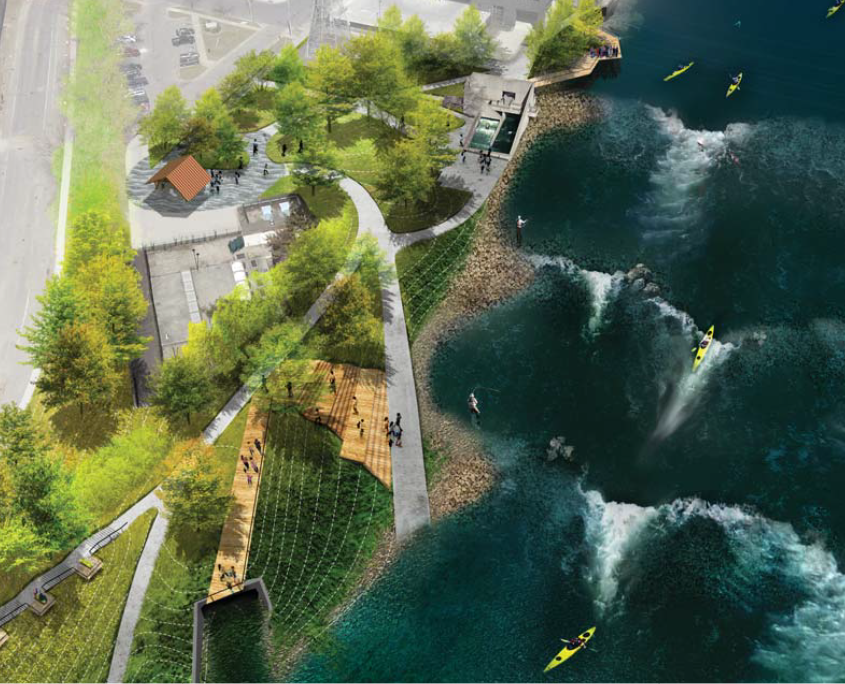